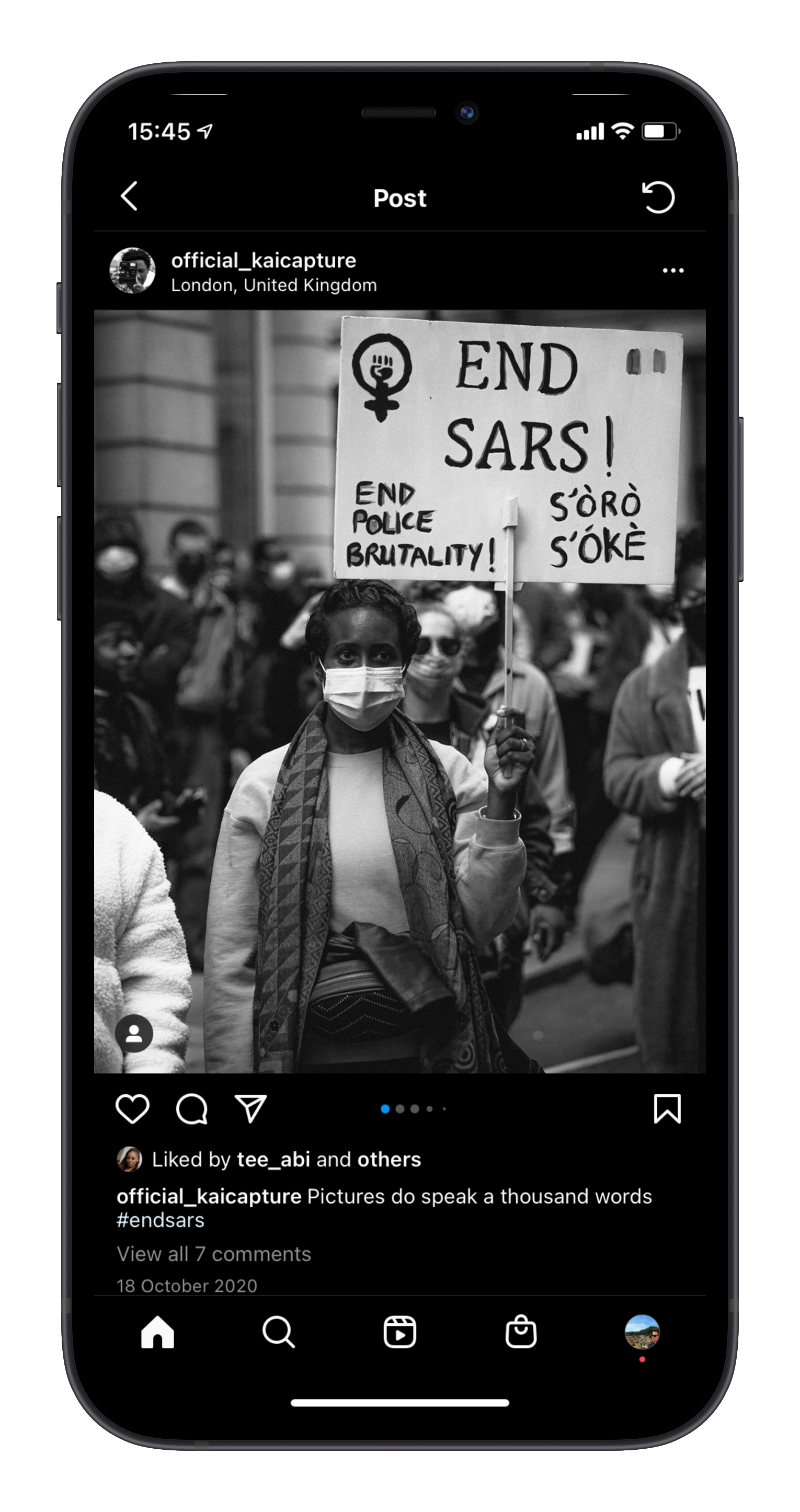 Since around October last year, Nigeria has been in a state of political crisis due to citizen revolt and ongoing protests regarding the #EndSARS campaign. The campaign began, intending to end police brutality in Nigeria, but has since expanded to challenge some of the country’s other issues such as corruption, poverty, and injustice.

Being of Nigerian descent and having family and friends that currently live in Nigeria, the #EndSARS campaign has been a huge topic of conversation, especially in light of the Lekki Bridge Massacre where dozens of peaceful protesters were murdered by the government on 20 October 2020. These events led me to start thinking of the key role that social media played in Nigeria’s #EndSARS movement.

Over the past decade, we’ve witnessed the powerful effects of the internet and social media. Similarly to how social media was used in the Arab Spring, during the #EndSARS movement, Nigerian activists used Twitter (and other social media platforms) to raise awareness, mobilise protesters, and discredit government propaganda through real-time information and citizen journalism. The campaign’s use of digital activism allowed it to scale up quickly, resulting in a large amount of publicity and international coverage.

The events of the ongoing ENDSARS campaign have made it difficult to ignore the ambiguity of social media usage in social movements in non-Western settings. The #EndSARS hashtag was first used in December 2017 by Twitter user @Segalink, when an open call was made for Nigerians to protest police brutality and demand for the dissolution of the Special Anti-Robbery Squad (SARS) – a unit of the Nigerian Police Force that has gained notoriety for its repeated human rights abuses.

Until the 5th of October 2020, much of the campaign occurred online, under the hashtag, #EndSARS, but as soon as a video of the squad murdering a young boy went viral, Nigerians all over the world, including myself, banded together to protest both online and offline.  Since then, the campaign has received significant international coverage and publicity, resulting in the Nigerian government disbanding the unit.

During the ENDSARS campaign, we have seen the integral use of collective and connective action by activists, however, we have also seen the Nigerian government use social media to counter these efforts, calling into question the effectiveness of social media in fostering political reform within Nigeria’s anocracy and third world countries.

The use of mass protesting and digital protesting through social media platforms, predominantly Instagram and Twitter have given Nigerians all over the world a voice that has ultimately disrupted the country’s culture of deference. However, the government still hasn’t reasoned with its people, resulting in little change. These events have made me question the effectiveness of social media in fostering political reform.

In June earlier this year, the Nigerian government accused Twitter, of facilitating ‘activities that are capable of undermining [its] corporate existence’. Their statement came two days after the social media platform removed a controversial post made by Nigeria’s president, Muhammadu Buhari as the statement was deemed to have violated Twitter community guidelines.

The Nigerian government quickly responded by announcing that the platform would no longer be available for use within the country indefinitely as a result of the deleted tweet. This action has led many Nigerians to believe that it is part of larger agenda to criminalise the use of social media with a view of shutting down its use in Nigeria because of its ability to quickly mobilise the citizenry against the government, as seen in the 2020 #EndSARS campaign.

Given the Nigerian government’s numerous attempts at citizen control and the crackdown on social media that happened shortly after the first wave of the campaign, it is no surprise that they have taken advantage of the situation and banned Twitter.

Although online activism has largely benefited this campaign, its use has also been quite damaging, due to Nigeria’s social and political environments. A closer look at digital activism and connective action in the context of the #EndSARS campaign shows how the use of social media manifests differently in less democratic environments. Is it that said governments are afraid of the internet because it offers a platform for the social actors, both individual and community?

Social activists tried to progress the campaign on both online and offline fronts, but the measures taken by Nigeria’s increasingly authoritarian regime have significantly prohibited its advancement and success. Following the events of the Lekki Massacre, the country’s high levels of corruption and government control have managed to silence the campaign and Nigerian citizens to a large degree. In countries like Nigeria, although such a powerful tool, it seems as though, social media can only minimally facilitate social change and political action.