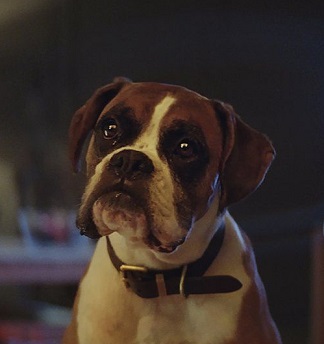 Christmas, like charity, begins at home. Well, it does for me and countless millions who anticipate the moment the Christmas TV ads go on air. Once they’ve premiered, it’s non-stop tinsel and turkey all the way to January.

These festive offerings are pored over by TV critics and social commentators alike, keen to offer meaningful interpretations on the narratives. The ads have a profound impact on the national mood and set the tone for the festive season in a way that can’t be underestimated.

We’ve become accustomed to John Lewis leading the charge, as it did again recently. I’m pregnant, fiercely hormonal, and cry at almost anything. So there I was for the first viewing, tissues in hand.

But a bouncing dog? Sure everyone loves CGI animals, but where’s the meaning?

Everyone has their theories about this unusually cheerful ad from the UK retailer that’s never ‘knowingly undersold’. Could Buster the Boxer be a clever analogy for the Trump win, as one national TV critic suggested? Probably not, given that the £6m campaign was planned and filmed in late Summer. So was this a deliberate attempt by John Lewis to ‘go happy’ after 2015’s ‘Man on the Moon’ ‘sadvertising’ campaign?

As much as I like to think of Buster drooling across the trampoline, where’s the deep societal commentary? The bit that says ‘at Christmas remember there’s always someone worse-off than you are and don’t you forget it while you’re elbowing fellow shoppers to get to the bargains on Christmas Eve.’

By contrast, Marks & Spencer with its Mrs Claus offering has effectively ‘done a John Lewis.’ In this campaign by film-director royalty Tom Hooper (The King’s Speech), there’s cute kids, a message about love and family – even the eponymous Mrs Claus is a dead ringer for Helen Mirren (if you squint a bit). It has just the right amount of ‘twinkle’ and there’s something poetic in the fact that the ad’s hero is a woman who’s unafraid to take charge.

(Contrast that with John Lewis who chose to put their ‘mum’ in the kitchen while ‘dad’ erected the trampoline outside. Ok, it’s not about gender stereotyping and we’re all reading far too much into it, I know, I know.)

Some relief then that Waitrose went gender-neutral with its Coming Home ad, featuring a lost Robin and a mince pie. Robins are as festive as it gets; throw in a second red-breasted-fluff-ball awaiting the return of their bird-love and, well, pass the tissues again.

From the sublime to the faintly ridiculous then, it has to be Aldi that takes the top spot this year, for its utterly meaningless but completely brilliant tale of Kevin the Carrot who longs to meet St Nick. Confronted by a poorly-looking mate whose been roasted with the turkey, before setting fire to his carrot-top on a candle and nearly taking the tree with him, Kevin finds himself swinging gaily from a reindeer antler, carried aloft by Santa’s sleigh. His dreams made a reality – the perfect antidote to 12 months that have been completely bananas.

Finally – and because Christmas isn’t just about shopping (right?), I love Heathrow’s use of a teddy-bear couple to brilliantly capture what an airport enables.  It brings to life what flying really means – visiting loved ones, coming home or the excitement of a holiday and families reunited for the festive season. The best bit for me is the transformation from teddy bear to grandparents, returning home to their grandchildren, which definitely got the tears flowing again.

The fact that John Lewis, Waitrose, Aldi, M&S and Heathrow all decided to go fully-festive and produce ads that say nothing about politics, speak volumes about the mood of the nation. This Christmas, it would seem that the thing we’re keenest to do is be happy and jolly in a way that only Buster the Boxer, Mrs Claus, Kevin the Carrot and hat-wearing teddy bears know how.