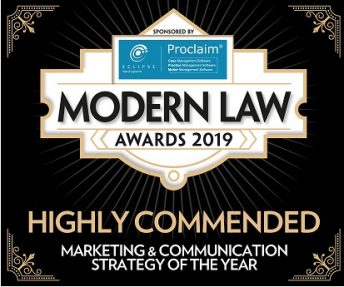 Our campaign for SFE (Solicitors for the Elderly) has been Highly Commended at this year’s Modern Law Awards.

With dementia set to overtake heart disease as the leading cause of death in England and Wales, the need to plan ahead for later life is greater than ever.

Yet the take-up of health and welfare lasting power of attorney (LPA) is much lower than the financial affairs equivalent, meaning millions of us haven’t set out our wishes should we lose the ability to make decisions about our treatment and care for ourselves.

We coined the term ‘incapacity crisis’ to highlight the increasing number of us that will lose mental capacity in the future, and the lack of planning and preparation in place for this scenario. In this way, we got people talking about an important and much ignored issue – and taking action to get a Health and Welfare LPA in place.

We put SFE at the heart of the debate by demonstrating the value an expert in planning ahead can make to getting your LPA right.

We’re delighted the campaign has been recognised by the Modern Law Awards which celebrate best practice in the modern legal services arena.