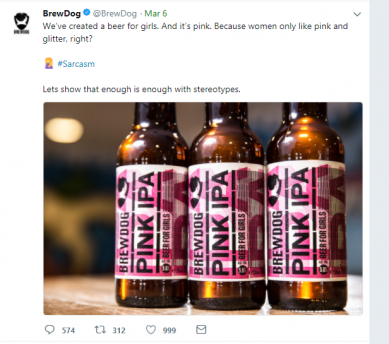 This year has encompassed #MeToo and #TimesUp, the phasing out of Grid Girls and the publication of gender pay gaps; the battleground of gender equality is constantly gaining momentum. This leaves brands in a quandary, to overlook International Women’s Day looks stuffy, but by engaging with the day they open themselves up to debate on their motivation, and on their methods.

BrewDog jumped in a few days in advance of IWD to launch their ‘Pink IPA’, a temporary rebrand of their popular ‘Punk IPA’, which they said was aimed at countering the ‘patronising’ efforts of other brands to market their products to women. They perhaps had in mind here Doritos’ pilloried announcement that it would be designing crisps for women that had ‘less crunch’ and could ‘fit inside handbags’. ‘Pink IPA’ would be sold to women at a 20% discount, and 20% of profits from the sale would go charities fighting inequality and supporting women.

Whilst these intentions may sound positive, their use of a satirical angle, announcing the drink’s launch through twitter “We’ve created a beer for girls . And it’s pink. Because women only like pink and glitter, right? #Sarcasm”, caused controversy.

Many commenters felt that instead of critiquing sloppy campaigns aimed at women, Brewdog was just creating its own sloppy campaign. From this angle, Brewdog’s parody was simply too close an imitation of the truth. To a consumer picking up a bottle, without actively having read their press release, Pink IPA reads as just another silly pink product aimed at women.

In a culture where many genuinely sexist jokes mask themselves in supposed irony, an audience who might otherwise support BrewDog’s initiative instead felt the parodic style trivialised the issue, rather than enlightening it.

BrewDog’s response to the controversy thankfully avoided this defensive line, saying not ‘you can’t take a joke’ but “We’ll try to be funnier next time”. As they did have commitment to charity at the heart of their action, rather than a marketing ploy alone, they were right not to apologise for the intention, just to recognise that they did not quite pull off the execution.

As a success story on the ways to create something genuinely insightful for International Women’s Day tie-in, Spotify has joined with Smirnoff to launch Smirnoff Equalizer – a tool that enables Spotify users to map out their listening habits according to gender, and can suggest a more gender balanced playlist if you’re on the look out for one. 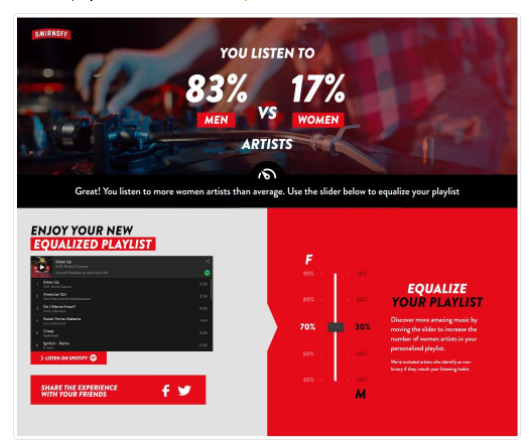 This comes as a response to Spotify’s 2017 Year In Music statistics, where only two female artists were featured in the top 10 songs and no women were found in the top 10 internationally streamed records.

The key achievement of this is that it directs listeners towards female artists, and ultimately champions the work of these artists, rather than that of Spotify or Smirnoff. At the same time, it also flags up the rich universe of data Spotify holds, as well as its increasingly nuanced and powerful playlist-making algorithms.

Smirnoff Equalizer has the potential to give people a real pause for thought, to consider their own listening habits, and to discover exciting new music they might not have otherwise encountered. The self-reflection element is a really key part – just like a quiz that says ‘Which cheese sandwich are you based on your favourite Disney song?’ people jump at a chance to find out more about themselves and their tastes.

As neither music nor vodka are strictly gendered, this campaign also doesn’t market itself to women or to men, a refreshing universality against a barrage of female oriented products leaping at ‘empowerment’ and often just missing the point.

Let’s look forward to the year ahead – where campaigners will continue to motivate for change, and where organisations can put their considerable influence behind sincere commitments to celebrating and supporting women of the world.