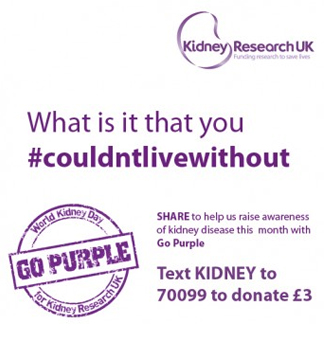 Stand Agency has been appointed by Kidney Research UK, the country’s leading charity dedicated to kidney disease research, to launch an integrated social and traditional media campaign for the charity’s awareness month in March.

The agency’s brief was to produce a creative campaign to raise funds for research into kidney disease, as well as to increase awareness of the impact of the disease on millions of people.

Having seen the success of social sharing movements such as #nomakeupselfie, Kidney Research UK is keen to be the next charity behind a viral social campaign and Stand’s creative ideas and knowledge of the charity sector made the agency’s proposal stand out.

This appointment marks a strong addition to Stand’s portfolio of charity clients, with the agency having won retained and campaign work for Anchor Trust in November 2014. Since its launch in 2012, Stand Agency has also implemented impactful and creative campaigns for charities such as Contact the Elderly and Dementia UK.

“It’s great to have the team at Stand Agency on board. We have already found their enthusiasm infectious. Their social media idea really caught our eye and we feel that their commitment and tenacity will make sure our story gets to where it needs to be.”

“We are so excited to be working with Kidney Research to raise awareness of this hidden disease that affects so many people.

“We love the challenge of creating an idea that makes people think differently about an issue and we believe this campaign will.”