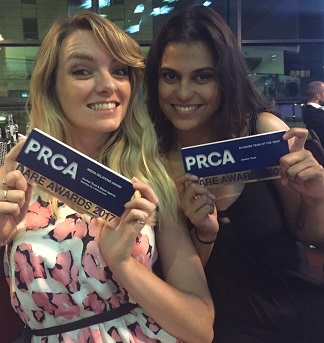 Who would’ve thought it? Stand Agency and Anchor Trust have done it again – we’ve won another award for our brilliant campaign Standing Up 4 Sitting Down!

After winning this year’s CIPR Excellence Award for Best Use of Media Relations, we have now gone on to win the PRCA Dare Award for Best Use of Media Relations (one of the most prestigious categories in the sector, might I add!). At Stand, we’re really proud of our track record of communicating issues that are at the heart of our society, and this award is testament to that.

The campaign addressed a really important issue for older people. Did you know that the lack of seats on high streets and in stores deters older people from going out to do their shopping? For some, shopping provides a reason to get out and about, involve themselves in the community, and catch up with neighbours. Without this opportunity, some may rarely leave their homes, and are more likely to suffer from loneliness and isolation, which we know is one of the biggest killers amongst older people. This is the reason we launched Standing Up 4 Sitting Down.

Ensuring more seats are available in stores is a simple solution; one which could increase revenues for the high street by a whopping £3.8 billion a year.

The impact of the campaign was immense (if we do say so ourselves): SU4SD was featured 18 times on BBC Breakfast and BBC News on launch day, as well as appearing in 249 pieces of coverage over the next few days. This included 16 nationals such as The Sunday Telegraph, The Times and Daily Mail.

Most importantly, the campaign made a real difference. It prompted a national conversation about the need to value older people. And persuaded retailers and politicians to stand up for sitting down – with Morrison’s and other retailers committing to providing more than 3,000 chairs across the country. It goes to show there is an appetite for social change – after such a turbulent year, it was reassuring to see people in the UK want to take care of the older people in their communities.

And this won’t be the last you hear of SU4SD. Watch this space!