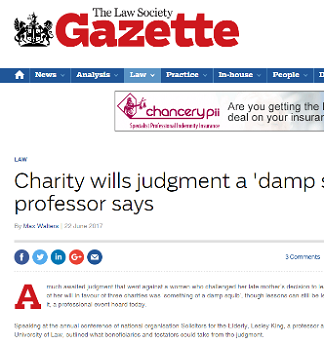 Every month we compile a few of our favourite #CrackingClientCoverage and social success stories – here are our picks for June.

Social mobility has been in the news this month with the report from the Social Mobility Commission. One of our clients, City Year UK, addresses the issue of social mobility head-on through their programme of placing volunteers in schools in deprived areas. On the back of this report, we secured two thought leadership pieces for Sophie Livingstone, the Chief Executive of City Year in The Independent and The Times Educational Supplement.

It has been a great month for DofE coverage. We secured an opinion piece by DofE Chief Executive Peter Westgarth in both the print edition and online for Times Education Supplement. Peter highlights the importance of soft skills and the benefits that offering DofE as part of apprenticeship schemes in the workplace can have to businesses. Additionally, we had coverage in The Mirror featuring how a DofE Award can enhance a young person’s CV.

Amid all the political chaos of May, key NHS statistics around the numbers of delayed transfers of care were released without much public scrutiny. Yet again, issues around health and social care had fallen from the news agenda. To bring this back into focus, Jane Ashcroft CBE, Chief Executive of our client Anchor penned a letter raising her concerns which we placed exclusively in the Daily Telegraph.

We then secured an additional 11 pieces of regional coverage, in regional big hitters including the Birmingham Post, The Bath Chronicle and Southern Daily Echo. Here is our piece in the Daily Telegraph:

Throughout the election campaign we’ve been working with moneycorp, foreign exchange specialists, to offer on-the-ground expert insight into market reactions – namely the impact on sterling. Following the election result, we secured some key briefings with moneycorp’s CEO, Mark Horgan, and businesses journalists at The Independent and City AM. Check out some of our great coverage:

June saw Solicitors for the Elderly (SFE) hold its National Conference for professionals across the sector, which addressed the key issues affecting older clients and included an inspiring keynote from Dame Joanne Bakewell. Ahead of the event, Stand secured two briefings with legal journalists at The Times and The Law Society Gazette, which both took place on the day. This resulted in coverage in both publications, as well as further interviews and profile opportunities for the membership’s new Chair, David Sinclair.