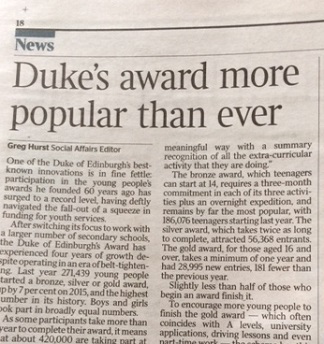 May was a month of more cracking client coverage. Here is a roundup of the best bits.

City Year UK research hit the headlines this month as they called for the campaigning parties in June’s election to support apprenticeships and other forms of employee training. This fantastic City A.M. piece came at the beginning of Learning at Work Week, placing City Year UK at the forefront of volunteering opportunities for young people in the UK. City A.M. continued to cover the story the next day as well!

At the beginning of May, Stand Agency announced moneycorp’s acquisition of US-based corporate payments business Commonwealth Foreign Exchange. We worked with moneycorp’s senior team to arrange briefings with tier one journalists, amounting to 22 pieces of coverage across the month, including Reuters, Daily Mail and the The Daily Telegraph. Our favourite was this piece in The New York Times, not only because it highlights moneycorp’s impressive growth and future expansion plans, but because… well it’s the The New York Times!

Coverage was also secured in The Daily Mirror, The Sun, ITV This Morning, Pick Me Up Magazine, My Weekly Magazine and a number of trade and regional titles. Have a read of one of our favourite pieces in The Express!

Hundreds of people, restaurants and foodie accounts got behind the #britishtomatoweek hashtag in May, sharing their tomato-celebrations and foodie snaps. With posts from all the big supermarkets and foodies such as Jamie Oliver – the social media element of the campaign worked well to bolster our media story.

Solicitors for the Elderly (SFE)

The probate campaign was a huge success for SFE and saw the probate fee rise by the government stalled. Our coverage for the campaign was very impressive, have a read of it here! On top of the campaign we secured a range coverage for SFE this month, from commentary on Theresa May’s care sabbatical to top tips on preparing for dementia, as a part of Dementia Awareness Week. What we loved most though was a fantastic expert response piece to a reader question in This is Money and Mail Online. The article was authored by SFE Director, Karon Walton, and the question was: Mum’s will says her partner can stay in her bungalow for life, are her sons now officially landlords until they inherit?

This is Money: Mum’s will says her partner can stay in her bungalow for life, are her sons now officially landlords until they inherit?

It’s been a fabulous month in terms of media coverage for DofE. One of our favourite pieces was written in The Times by Greg Hurst, which involved a briefing with Chief Exec Peter Westgarth. We approached Greg with our super impressive annual results that show DofE Award being more popular now than ever and still going strong 61 years on! The results were released just after the Duke announced his retirement which meant it was timely to discuss the future of the DofE and its relevance for young people today. We also secured coverage in The Sun and HR Magazine.

Ahead of the election next week, May saw the leading parties reveal their proposed policies and there was much was to be said about social care.

Joining the debate, we issued a letter to editors from Anchor’s Chief Executive, Jane Ashcroft CBE, which implored the next government to make older people’s care a priority. Our bold letter called for our next leader to turn ‘words into action’, as previous governments have failed to, and secured us 20 pieces of coverage, including The London Evening Standard, iNews and Yahoo! UK.

May was a busy month for the team working with global management consultancy, Oliver Wyman. The firms latest research revealed FTSE 100 companies could face billions of pounds a year in fines when GDPR hits our shores.

Using the ‘12 month away mark’ as a hook, on 25th May this year we set up technical briefings for Chris McMillan, Partner in the data and technology arm of the business. As a result of meetings with key journalists, we secured quality coverage for our client including an insightful piece in The Financial Times about how banks will acquire, retain and use personal data in the future.

To top it off, we also secured a half page op-ed from Chris in City. A.M., a key business outlet. This worked to build the profile of the firm by positioning one of its partners as a thought- leader and go-to source for all things GDPR.

The Financial Times: Lenders in ‘panic’ over EU data law