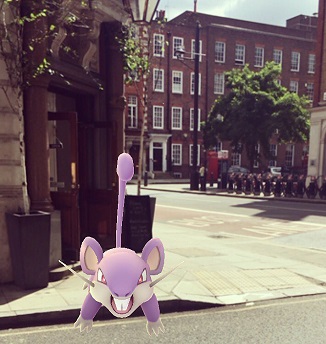 If you had told me a few weeks ago that the July marked the second-coming of Pokémon, I wouldn’t have believed you. But here we are on the 13th of July 2016, and every adult I know is embracing 90s nostalgia – running around consulting their Pokédex with the aim of catchin’ them all.

But whether you’re laughing at it, or are a Pokémon master yourself, there is no denying that Pokémon Go (PG) is a big deal.  It took the viral game Angry Birds 35 days to reach an audience of 50 million, it took Pokémon Go less than seven days – and it hasn’t even been rolled out worldwide.

Having overtaken Tinder with its number of installed downloads – PG is currently sitting on 5.6% of all US Android phones –  and it’s not stopping there – with the digital world expecting it to overtake Twitter’s daily active users in a mere few days.

So what is it? Pretty much, Pokémon Go is an augmented reality smartphone game that brings the world of Pokémon to your street, based on Google Maps – you could come across a Caterpie in Costa or a Jiggly Puff on the Central Line. You can’t just sit stationary, the real humdinger for the game is that you need to get out and about – something new for the couch-dwelling generation of original Pokémon fans. If you find a rare Pokémon, you have to act fast, because it’s not just you that can see this it, other users will most likely be crowded in the same spot, also vying for its capture. Such scenes in strange locations (such as sex shops and gang headquarters) have made news headlines around the globe.

Despite pictures circulating the internet of PG users mass-gathering outside points of interest around the globe the app currently has no chat function, something that is expected soon and will no doubt be the final element to fully cement the app as a fully-fledged social network.

So the verdict? Why not give it a go and get involved in the conversation! Over the past week we have seen some big organisations share about the game on social, such as the NYPD tweeting a Pikachu as second officer or brands with retail outlets sharing sightings of Pokémon in store. In fact, the burst in popularly some restaurants and retailers have seen as result in the game have spurred Nintendo’s to announce its future plan for sponsored locations. The company hasn’t confirmed a date, but this ability for incentivise a customer’s visit has the potential of becoming a big player in the world digital marketing.

All and all, it’s all a bit of fun and I’m 100% behind it, because who knew the day would come where you could catch a Pikachu in your lunch break.

You can also find Beccy’s blog on the PRCA website here.