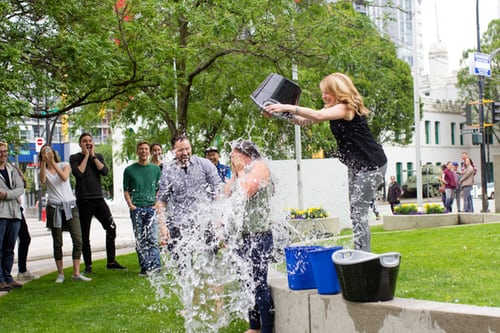 The video challenge went viral in 2014 and had people taking part in the absurd but funny exercise of pouring a bucket of cold water filled with ice, over their heads, recording it, uploading it to social media and nominating someone to do the same. A host of famous faces like Bill Gates and Homer Simpson took part, fuelling the campaign further. And on and on it went. You definitely saw one of these videos, or heard about it, even if you didn’t take part in it yourself.

I don’t mind admitting that when I first caught sight of an ice bucket challenge video, I had no idea it was to raise awareness for motor neurone disease. At most I associated the ice-bucket challenge with simply the acronym ALS – I couldn’t tell you what the A, L or S actually stood for. I can’t have been alone in my ignorance. How many of those hundreds of thousands of people who took part in the challenge, knew that it was for motor neurone disease? As the challenge gained momentum, arguably, the core message was lost along the way. But given its overall success, does it matter?

Any well-thought out communications plan includes key messages, supported by measurable objectives, which any communication activity is built around. If you lose the message, you lose the purpose and run the risk of derailing an entire campaign.

But it wasn’t derailed. The ALS ice bucket challenge is one of the most successful online campaigns ever. Not only did it raise approximately £160m, but it led to a breakthrough in science after a new gene was discovered, which allowed new treatments to be developed.

Likewise, the #nomakeupselfie campaign gave Cancer Research UK an £8m windfall which funded ten clinical trials. The difference with this one was that Cancer Research UK didn’t start the trending hashtag, or even come up with the idea. The hashtag wasn’t even linked to cancer originally. It just sort of happened.

At the very heart of both of these campaigns though, was an emotive subject and a clear call to action, all of which makes for shareable content. After that, internet viral witchcraft did it’s thing and good things happened.

The real beauty with online viral campaigns such as these, is the authenticity – they are a truly unique beast and there’s no telling what’s going to be the next phenomenon because it simply can’t be planned for.

So does it matter that people maybe didn’t know about the real cause behind The Ice Bucket Challenge?

Well, £160m was raised for the cause, so enough of the right people did.

This blog was written by Natalie Gidley, News & Media Relations Officer at Oxford Brookes University, who worked with Stand Agency for a week as part of a job swap.