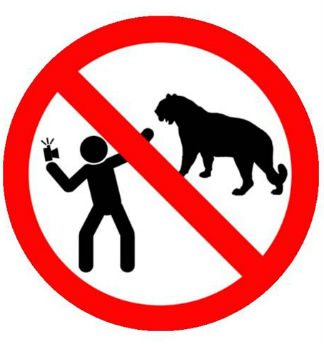 Earlier this week the Russian government launched its selfie safety campaign, aiming to get the public thinking more about their life and less about the social likes their snap might garner.

Hilariously, this campaign was paired with an impressive array of stick-figure warnings of when not to snap a selfie – in front of a train, hanging off the side of a building or with a mountain lion… To name a few.

Over the past year there have been a number of stories in the media about social snaps going wrong and resulting in tragic accidents – from the couple that fell off a cliff in Portugal to the gun selfie that spurred the Russian Police’s campaign – some people are so concerned with ‘likes’ that they have forgotten to value their life.

Let’s cast our mind back to the plank, just like the #extremeselfie – the plank, which involved people lying face down in a public place, was the original social media killer – with a man in Brisbane falling to his death after attempting the challenge on a balcony. The Russian Government have noted hundreds of injuries and dozens of deaths this year as a result of ‘self-photography enthusiasts’ documenting their lives.

So if you’re after a decent selfie, what should you do? I suggest you steer away from guns, grenades (anything explosive really), avoid anything with a killer instinct and sharp teeth – and stand firmly with two feet on solid ground.

Instead take tips from the master of the selfie, Kimmy K – her selfies break the internet… no life-threatening feats needed: http://bit.ly/1hmv9rc