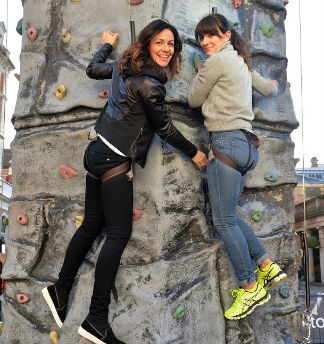 Here at Stand we are always up for a challenge, so when we heard that The Duke of Edinburgh’s Award (DofE) had big plans for its Diamond Anniversary year, we were keen to get involved. We have been working with the DofE since October, helping to shape the activity for 2016 and making sure the anniversary year kicked off with a bang.

To mark 60 years of inspiring work with over five million young people, the DofE wanted to do something special in 2016 – and so the Diamond Challenge was born.  The DofE Diamond Challenge aims to give everyone a flavour of the life-changing benefits of its renowned Award programme.  Running for one year only, it is encouraging people of all ages to take on a DofE-inspired challenge, whether that is learning a new skill taking up a new activity or going on an adventure, all while raising vital funds for the Charity that will transform the lives of many more young people over the coming years.  A huge variety of challenges have been pledged so far; from ultra-marathons to learning to cook, knitting a 60m long scarf to becoming fluent in Mandarin.  Stand AE Miri has even challenged herself to overcome her phobia of pigeons – you really can choose anything.

At the core of the DofE Diamond Challenge is the idea that we all need to push ourselves out of our comfort zones a bit more; there is a challenger in everyone.  Research carried out by the DofE has shown that while half of us in the UK recognise the importance of setting personal goals and having an element of adventure in our lives, fewer than 1 in 5 of us feel like we significantly challenged ourselves in 2015. As the thousands of young people who have successfully completed their DofE Award will agree, there is much to gain from trying something new: confidence, self-belief and new friendships are just a few examples.

We helped the DofE to officially launch the DofE Diamond Challenge on Tuesday 12th January in London. The day was a brilliant success and was centred around a challenge (of course).  A 24-foot climbing wall dominated Covent Garden’s East Piazza, with the aim being to have climbed the same height as Ben Nevis before it got dark.  It turns out we had underestimated the British public’s ability to haul themselves up vertical surfaces and by the end of the day the wall had been scaled an impressive 322 times – smashing the original target.

The DofE has a great network of celebrity ambassadors and it was fantastic to see so many taking the time out of their busy schedules to come down and support the launch of the DofE Diamond Challenge.  The day kicked off with the battle of the TV presenters as Davina McCall and Julia Bradbury raced each other to the top, with Julia narrowly pipping Davina to the post.  Jon Culshaw, Arlene Phillips, Alice Beer, Jim Rosenthal, Greg Burns, Matt Johnson and Zac Purchase also came down to show their support and have a go on the wall, alongside the DofE’s CEO, Peter Westgarth.

The Diamond Anniversary celebrations really have kicked off with a bang, and we have the media coverage to prove it.  A live interview from Covent Garden on SKY News, a slot on Good Morning Britain, a feature in the Evening Standard and an infographic in The i are just a few of our favourites. Not to mention the 338 (and counting) pieces of regional coverage and the 16 local radio interviews.  January has set the bar high for the rest of the Diamond Anniversary year – after all, we did say we liked a challenge.

To sign up to the DofE Diamond Challenge or find our more information please visit: https://dofediamondchallenge.org/