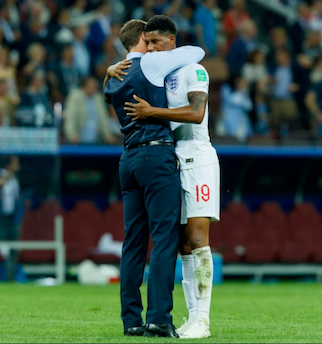 I’d totally forgot that I met Gareth Southgate about 20 years ago. I had entered a competition whilst at university to win some new football kit for the girls’ footy team. We won the kit and off we trotted to meet Gareth and also hold the FA Cup trophy.

I think I had forgotten I met him because he was Mr Nice Guy and didn’t say anything particularly controversial; the memory has got lost as a gentle one from the three foggy (and now distant!) years at university. It would appear that this is just one of the ’giving-back’ appearances Southgate made over the decades he’s been involved in football; diligently beavering away to support a sport he loves, not seeking public recognition for his endeavours.

I’ve been delighted to see people recognise his qualities in the past few weeks over The World Cup. Qualities such as niceness, openness and honesty usually get overlooked by tabloid media obsessed with big characters. But the press cannot get enough of Mr Nice Guy. People are talking about leadership qualities that aren’t associated with the negative leadership traits of Trump and Theresa May.

The world is finally excited by a leader who is humble and capable of showing his emotions. Gareth Southgate is the epitome of good leadership and it’s about time young people have someone in public life to look up to. He has shown that you don’t need to be narcissistic or arrogant to be a great leader. You have to have passion for what you do, inspire your team and believe in them and understand that other people (whether the media or the opposition) also have a job to do in the world.

His relaxed yet confident style has inspired not only a whole England team, but a whole nation.  Let’s hope one of the legacies of the World Cup is that more leaders can emerge in the vein of Southgate, across all fields of work and play.