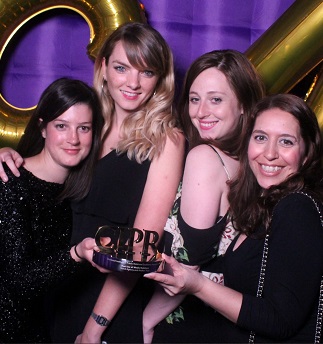 Stand Agency, award winners! We are very excited to have won Best Use of Media Relations at last night’s CIPR Excellence Awards for our work on Anchor’s Standing up 4 Sitting Down campaign.

Standing Up 4 Sitting Down is an important campaign that aims to increase awareness of a little-understood issue facing older people in the UK – the lack of seating on the high street which is deterring older people from getting out, increasing loneliness and isolation, and seeing the economy lose out on £3.8 billion each year.

The Media Relations Award recognises campaigns that use targeted media relations to achieve excellent results. Here’s what the judges had to say about our campaign:

The judges were really impressed with how Anchor Trust and Stand Agency identified an issue that’s so important in society but which nobody had spotted. From that issue, they created a campaign that resonated not just across the media, but also with retailers, politicians and society at large. They galvanised a coalition of those willing to support their campaign which has laid the foundation for real change. They used insight from Anchor residents, economic data and smart media targeting to tell a compelling and emotive story that helped them not just meet their campaign goals, but create a legacy on which they and others can build.

The SU4SD campaign launched with coverage on BBC Breakfast and BBC News, featuring in the headlines 18 times in one day. Over the following two days 16 national news outlets covered the story including The Sunday Telegraph, The Times and Daily Mail. Across the whole campaign 249 pieces of coverage were secured with a reach of 209,149,320.

And, most importantly, the campaign made a difference. It prompted a national conversation about the need to value older people. And persuaded retailers and politicians to stand up for sitting down – with Morrison’s and other retailers committing to providing more than 2,500 chairs across the country.

For more information about the campaign and Stand’s work championing older people’s rights see another of our blogs: Standing Up for Older People