Standing Up 4 Sitting Down 2.0 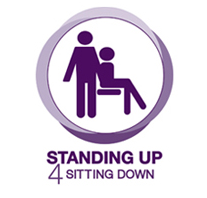 It’s no mean feat combatting ageism on the high street – but it’s the kind of cause that keeps Stand going.

We first launched Standing Up 4 Sitting Down a year ago, a campaign calling on high street retailers, big and small, to include more seats in stores and improve accessibility for older people. Turns out this was an issue close to the hearts of many people living in England.

Initially we secured retail partnerships from Debenhams, Hotter and independent retail stores around the country, and secured widespread coverage in print, online and broadcast.

A year on, we re-launched the campaign with a new report looking into the future of our high street and how our communities might look by 2030 if current trends stay the same. It’s a question most of us have asked ourselves already: what will our high-street look like in the future? As footfall continues to drop and online shopping becomes the norm, the livelihoods of our local stores are also threatened by automated check-out machines and the arrival of drone deliveries.

It’s easy to underestimate the importance of weekly shopping trips for older people. Not only do they allow people to keep their independence for as long as possible, they provide exercise opportunities and, perhaps most importantly, the chance to socialise with others.

We know that loneliness contributes to early death, reportedly more so than obesity and smoking cigarettes, so making sure that older people have access to their local shop is vital. Unfortunately, our research revealed that 1.7million older people feel shut out of the modern high street, with 60% of older people thinking the lack of seating on the high street is an issue.

With a new report, polling that gathered older people’s opinion on the matter, and new digital content directing people towards Anchor’s website, our re-launch was a hit.

We secured 111 pieces of coverage, including 3 minutes of footage on BBC Breakfast which aired 6 times across BBC One News, BBC Breakfast and BBC News 24. Showing the power of PR, we also increased store sign ups with 41 stores pledging their support on launch day alone. BBC Breakfast included a segment of the video on their Facebook page, which garnered 51,000 views. Elsewhere on social media, we secured a whopping 3,736,062 timeline impression, with 1,500 #su4sd tweets from 206 contributors (including Age UK, Arthritis UK and The Young Foundation). As content for social media, we boiled our research results into eye-catching infographics, and created Anchor’s ‘Seating Calculator’ where people can log in to find the optimum number of seats their local high street should have to cater for older people. This content engaged our audiences, spurring on the conversation. Currently, we have major retail support from Sainsbury’s, Morrisons and over 250 independent stores across the country. Now that’s a win!

Interested in joining us championing the rights of older people? Check out the SU4SD campaign here.