The fight for fair probate 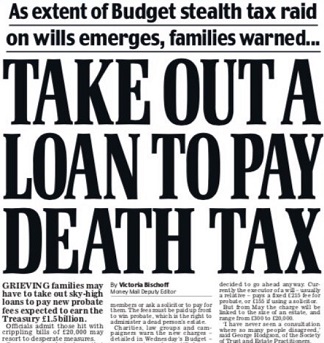 Probate. Perhaps not something you’re overly familiar with, but you may have noticed it’s been hitting the headlines recently, since the Government tried to push through proposals to significantly increase fees. For the past few months, it’s been keeping the Stand team very busy.

SFE (Solicitors for the Elderly) is an independent, national membership of lawyers who provide specialist legal advice for older and vulnerable people, their families and carers. When it comes to older client law, SFE is the gold standard.

Probate is something most of us will have to deal with at some point in our lives. A grant of probate is an official document issued by the court, which allows family and loved ones to process estates and access the money and assets left to them by someone who has passed away.

Previously, the fee for applying for probate was set at a flat rate of £215. However, in 2016, the Government held a consultation on changing the fee structure to a banded system, rising 13,000 per cent, to £20,000 in some cases.

SFE, along with 98 per cent of professionals and organisations who responded to the consultation, strongly rejected the proposal, branding the fees a ‘stealth tax’. So, when the Government announced in February it was to proceed with the plans, the Stand team went to work. Our brief was to represent SFE’s views and champion the consumer by strongly opposing the proposals and applying pressure to the Government to reconsider.

Ensuring we were the first to know about the plans, Stand Agency worked with the SFE Board to draft a strong comment and shared the news with key national journalists. A proactive press office meant we were able to establish SFE as a leading voice in the debate from the offset, with SFE often featuring as the only organisation quoted alongside MPs in coverage including the Daily Mail’s front-page story, The Sun and This Is Money.

SFE set up an online petition to scrap the fees, which soon gathered the 10,000 signatures required to force a response from Government. The response, as expected, defended the fees and confirmed the intention to push forward with the proposal. In response, we continued to generate national coverage criticising the fees, with highlights including a feature on BBC Radio 4 Moneybox and more coverage in Daily Mail around the cost to families across the country.

Keeping our finger on the pulse

When SFE members caught wind of a parliamentary report claiming the fees were unlawful, we reacted quickly to spread the news. We did so with another front-page scoop, this time in The Times.

Despite the fresh criticism, a General Committee voted in favour of the proposals in April, leading to our comment piece in the Sunday Express, aptly titled: The fight for fair probate fees.

You can imagine our delight on 20th April when the Prime Minister made an unexpected announcement scrapping the fees until after the election. The spotlight on the issue that we helped to create undoubtedly had its part to play in the decision, and our joint work earned SFE the priority comment in the Daily Mail’s coverage of the U-turn.

Whether the ‘death tax’ will be reintroduced after the election remains to be seen, and the SFE press team remains on standby to continue the debate.

The power of PR

SFE lawyers feel passionately about this issue, on behalf of their clients, so it was important that the organisation represented its members’ views. We ensured SFE was at the forefront of the debate, able to offer journalists up-to-date commentary, insight, and (in some cases) the exclusive, before anyone else.

This is a great example of how a powerful PR campaign can make a tangible difference – highlighting issues, raising debate and ultimately influencing political outcomes.